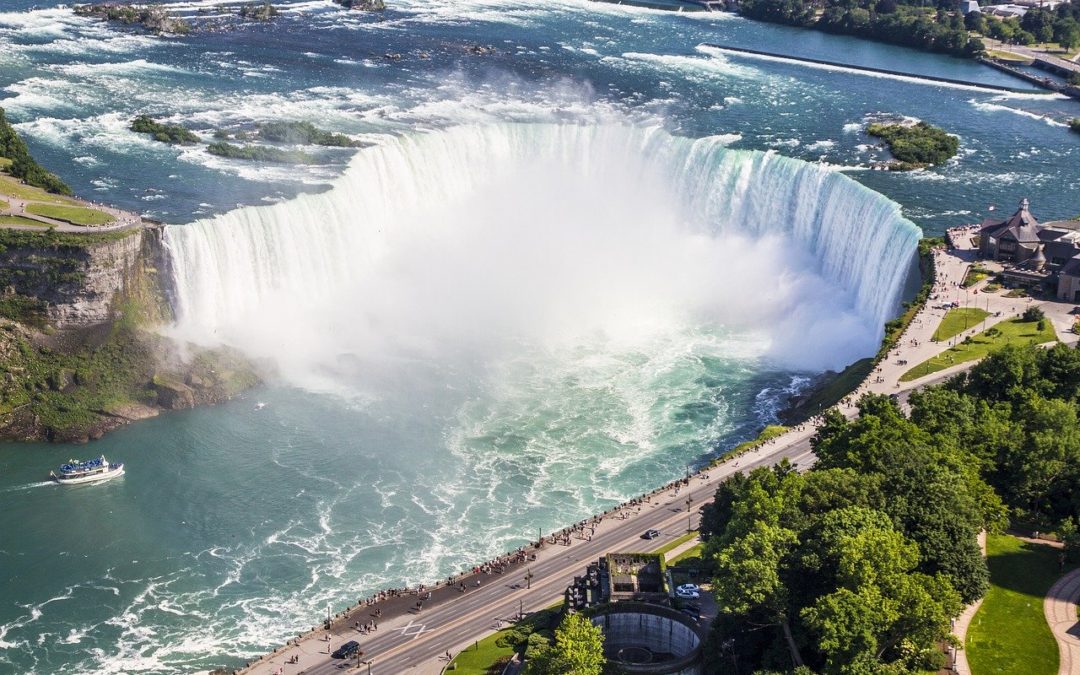 Niagara Falls is the oldest falls located in the border of Ontario, Canada and New York, USA. It is one of the best tourist destinations in the world. Here are the most 10 interesting facts to know about Niagara Falls.

Niagara Falls produces 28 million liters of water for every second which has the highest flow rate in the world.

The Niagara Falls State Park is the oldest state park in America. It was established in 1885 at Niagara Reservation. It is spread over 400 acres of land.

Fish travel over Niagara Falls. About 90% of fish falling from falls survive because of their ability to flow with water. The white foam and the air at the base of falls act as a cushion effect for fishes.

5. Cave of the Winds

The Cave of Winds of Niagara Falls is torn down every year and is reconstructed.

Many people have crossed the section of the falls on tightrope. Annie Edson Taylor, a teacher was the first person to roll down the falls in a barrel at her age of 63 years. Now, it is strictly not advisable to attempt such stunts. If people perform such stunts, then they had to pay a fine.

Around 10,000 years ago, Niagara Falls was formed by the glacier activity.

For every ten years, the Niagara Falls is eroding at the rate of 3 to 4 inches. The current rate of erosion is 1 foot per year.

Around 30 million people visit Niagara Falls every year. It is the highest and popular tourist destination in the world.

Things to do in Niagara Falls 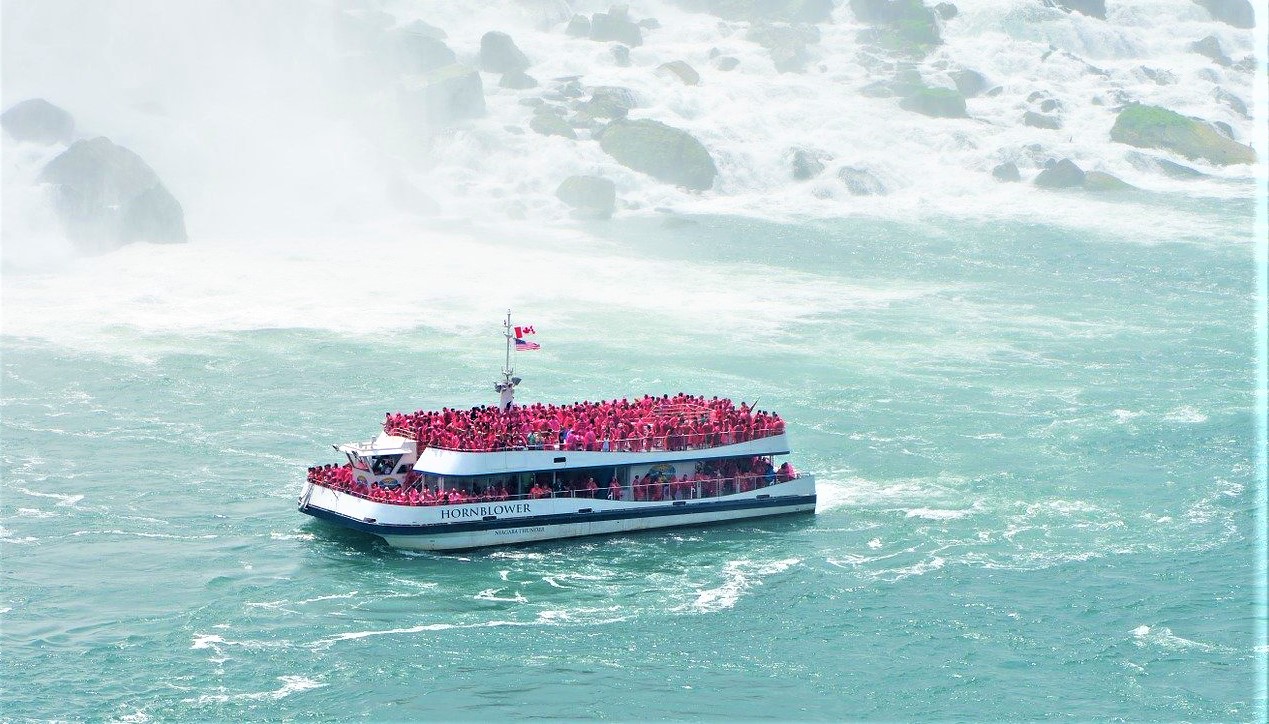 Things to do in Ontario

Visit the Horseshoe Falls, which is the largest part of Niagara Falls. You can take a ride to the foot of Horseshoe Falls by Horn blower Niagara cruises or get drenched in the whirlpool jet boat tours or take a tour over Niagara Falls by helicopter ride or can observe the waterfalls from Skylon Tower, which is 520 feet high. You can go to Clifton Hill to witness Wax museum, Ripley’s Believe it or not, Niagara sky wheel, Haunted house and enjoy the varieties of delicacies at fast food joints. Experience a whirlpool aero car tour across the Niagara River and get relaxed at the Falls View Casino Resort which offers spa and casino. Taste the best sea food and local wines at Tide and Vine Restaurant and layback having a beer at The Beer Garden.

Things to do in New York

Visit Niagara state park which is the oldest state park in USA. You can take a double decker boat tour to Maid of the Mist, which is located in the state park or take a whirlpool jet tour to visit Devil’s Hole state park or can have the bird’s eye view by helicopter ride. Heritage lovers can visit the heritage centers such as, Underground Railroad center and Old Fort. Enjoy the food and casino at Seneca Niagara Casino and taste the varieties of wines at Niagara Wine Trail. 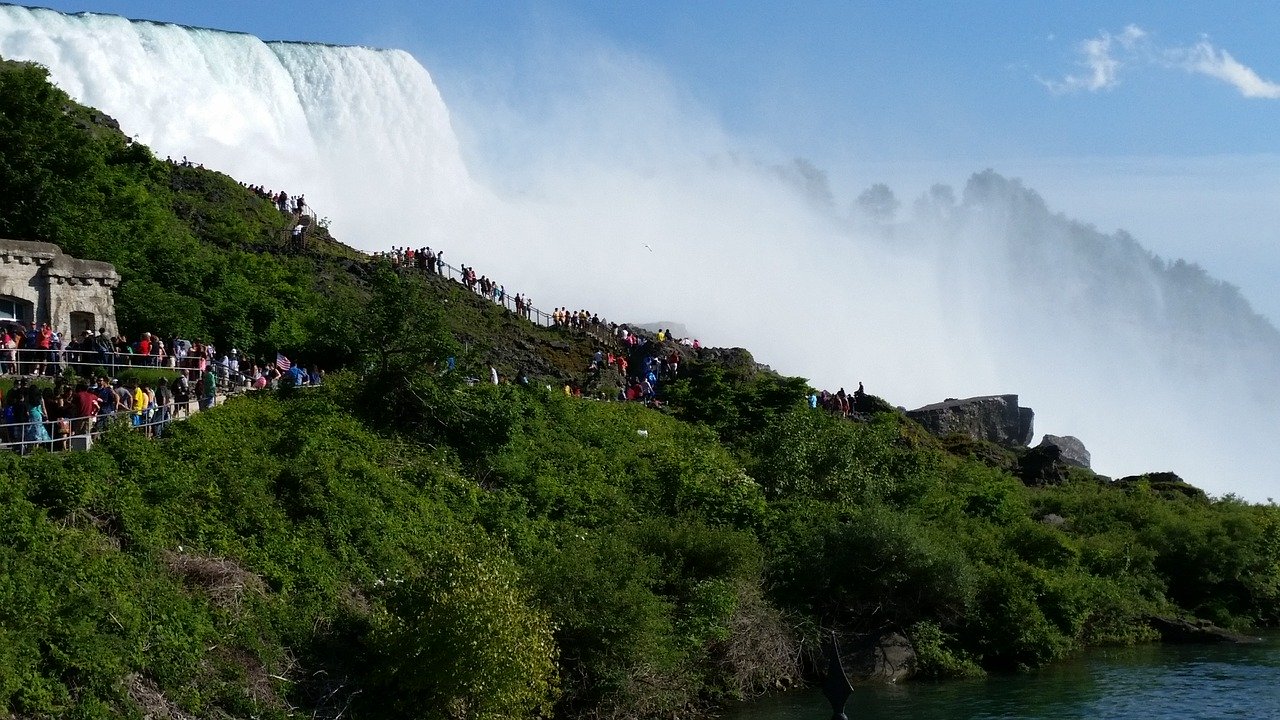 Niagara Falls State Park is the oldest state park in America which was founded in the year 1885. It was created by the team led by Frederick Law Olmsted during preserving and restoring the Niagara Falls. It is located at the Niagara Reservation in New York. It was conserved by the government and became the historic preservation.

It covers 400 acres of landscape with wide varieties of flora and fauna. Out of 400 acres, 140 acres is under the water. You can have a breathtaking view of American and Bridal Veil Falls at the Cave of Winds in the state park. The Cave of Winds is torn down every year and is reconstructed. Statue of Chief Clinton Rickard is present near the Great Lake Gardens in this state park.

This state park is open 24 hours for 365 days. You can walk through the amazing park or can even go for a Niagara Scenic trolley ride to explore this park. More than 8 million travelers visit this state park every year to enjoy the beauty of nature.

Niagara Falls experiences continental climate having very cold and snowy winters; warm and humid summers. It has significant rainfall throughout the year.

Summer is from June to August and temperature ranges from 17 degree to 25 degree Celsius. Summers are pleasant. There will be bright and sunny days. It will be peak in the month of July.

Fall is from September to November and the temperature ranges from 8 degree to 22 degree Celsius. First snowfall will be expected in the month of October. September is the wettest month in the year. Rain and cloudy skies are common during this season.

Winter season is from December to February and the temperature ranges from 2 degree to -9 degree Celsius. Winters are extremely cold. The temperature can drop below freezing point and can expect more snow during this season. January is the coolest month in the year.

Some of the beautiful stays in the New York city with breathtaking view of the falls, and walk-able distance to the Park. 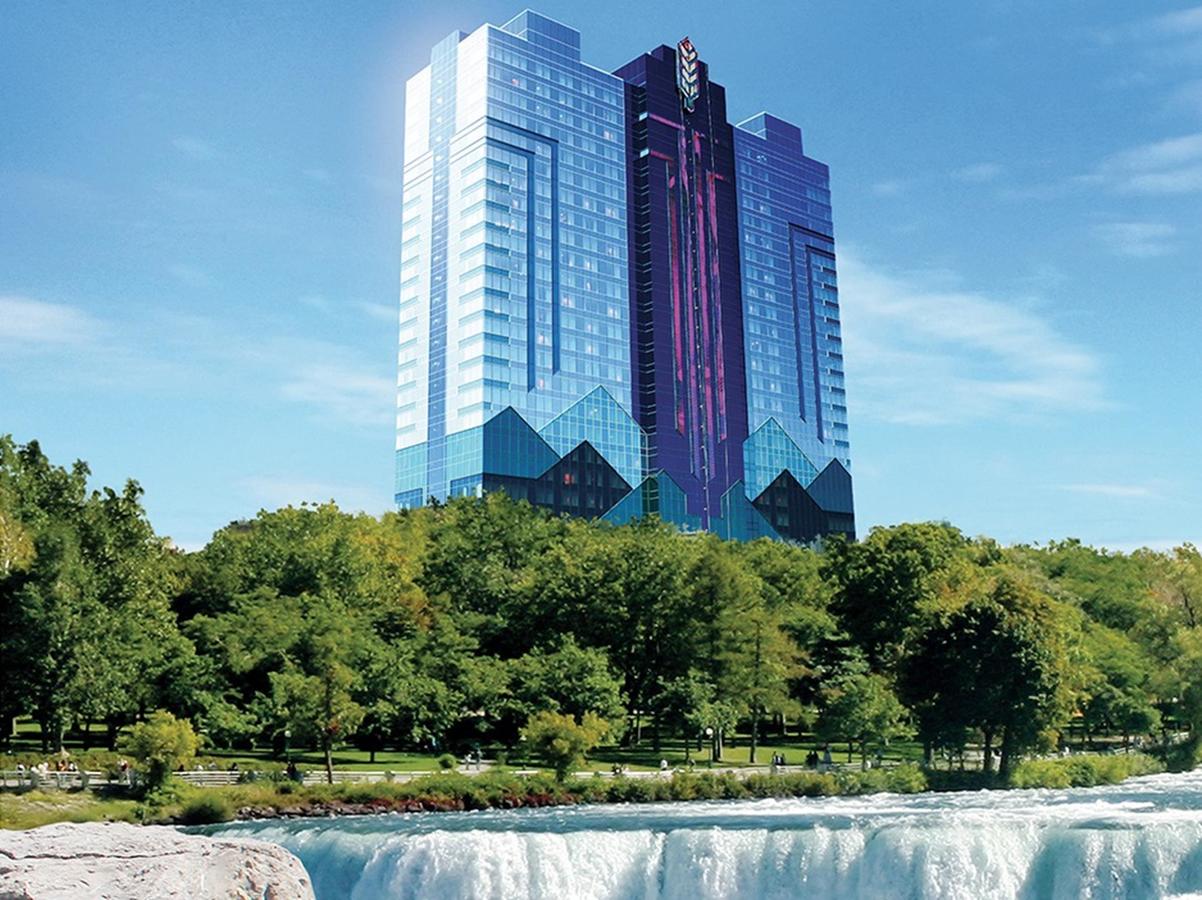 What can be more enjoyable than a stay at Seneca Niagara Resort. When you come to visit Niagara Falls, you should be able to see the view for the entire period of your stay there. And that is possible with the stay at Seneca Niagara Resort. This is a NY hotel with less than 1 km from Niagara Falls. Ask for the view room and you can get a breathtaking view of the falls. 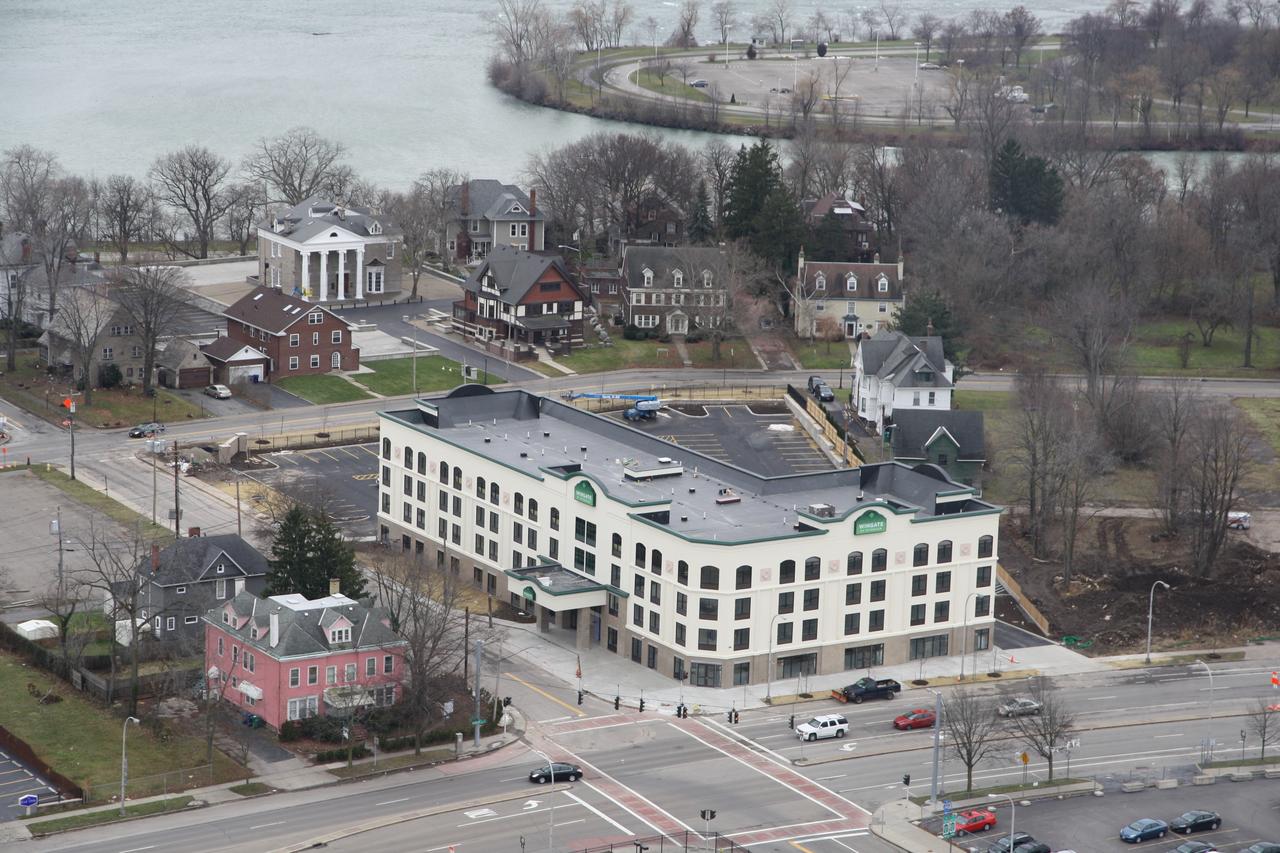 A Fine hotel not away from the falls, its just a 10 minutes’ walk. It is just a walk-able distance to the fall, National Park, Casinos and shopping. Who doesn’t have to enjoy the scenery of this beautiful place by walking along the park rather than take a drive? 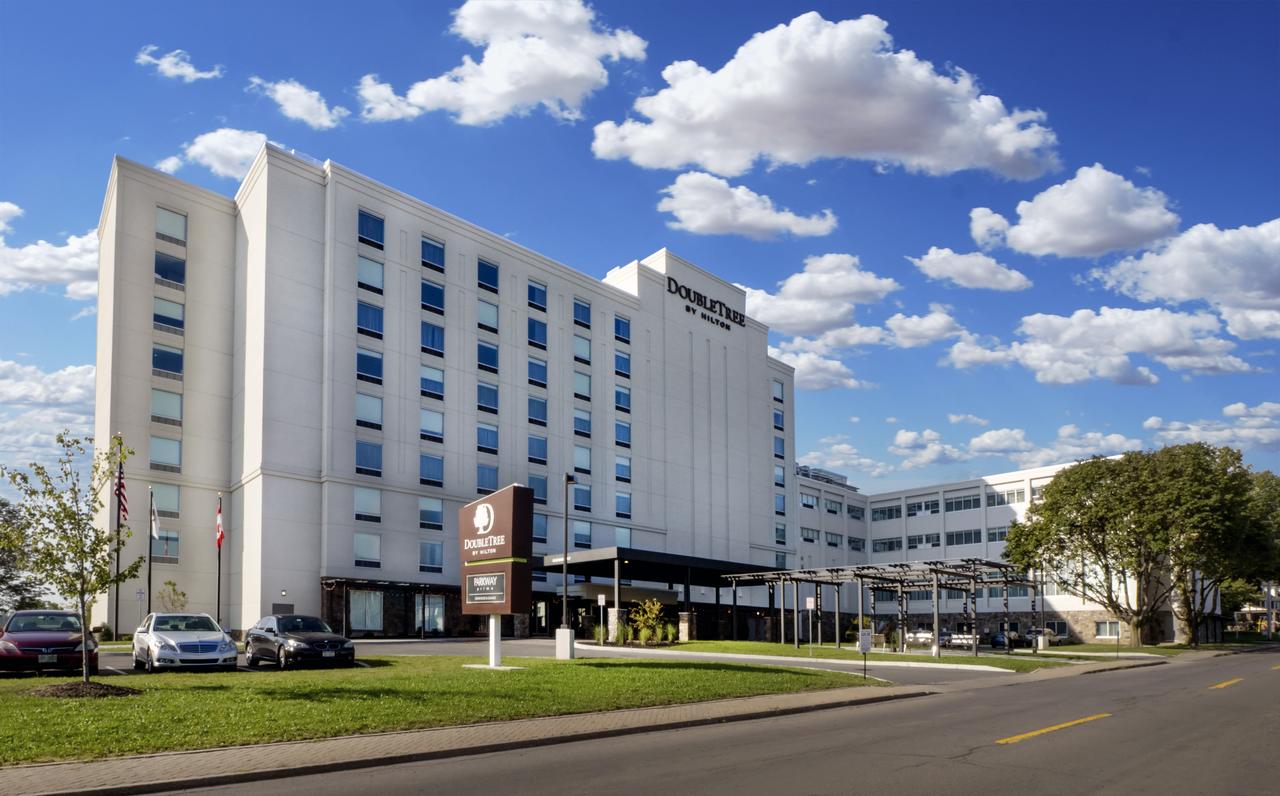 You can ask for the river view or city view room in this hotel and you can get an excellent view of the river right from your bedroom. Perfect location for a stroll to the falls and exploring the park along the river. Just outside the hotel is the Niagara river and one has to just cross a small road and reach the bank.

Some of the beautiful stays in the Canada with breathtaking view of the falls right from the comfort of your room, and walk-able distance to the Park. 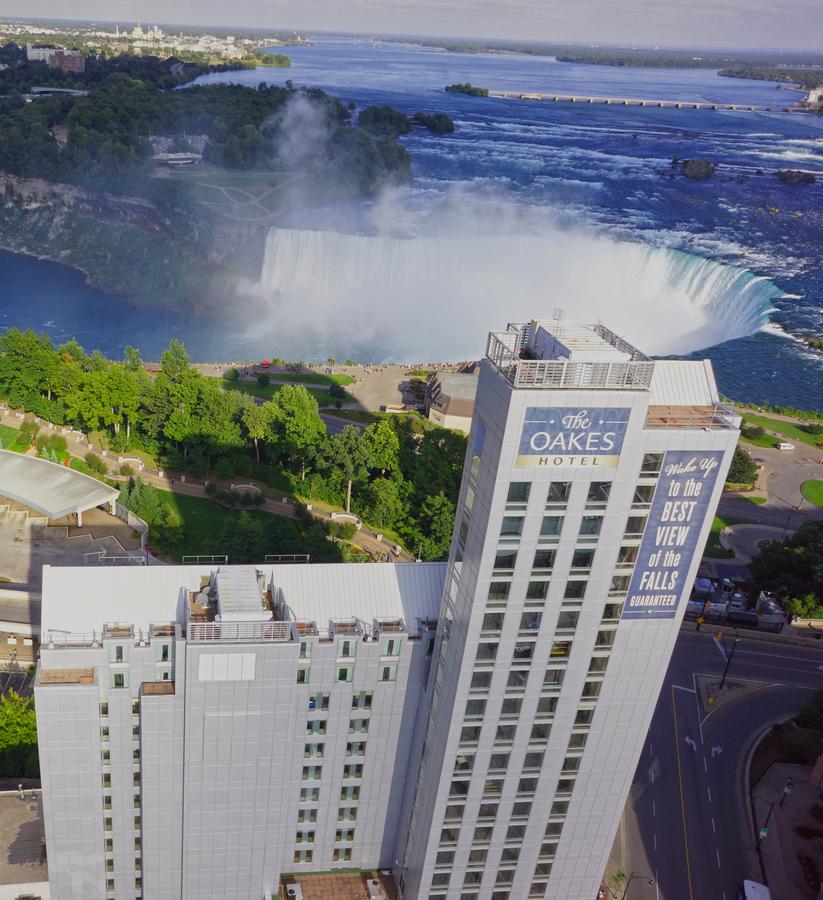 The Oakes Hotel Overlooking the Falls

The Oakes Hotel gives you a spectacular view of the Horseshoe Falls. The view from the rooms are amazing and the services they provide are excellent. 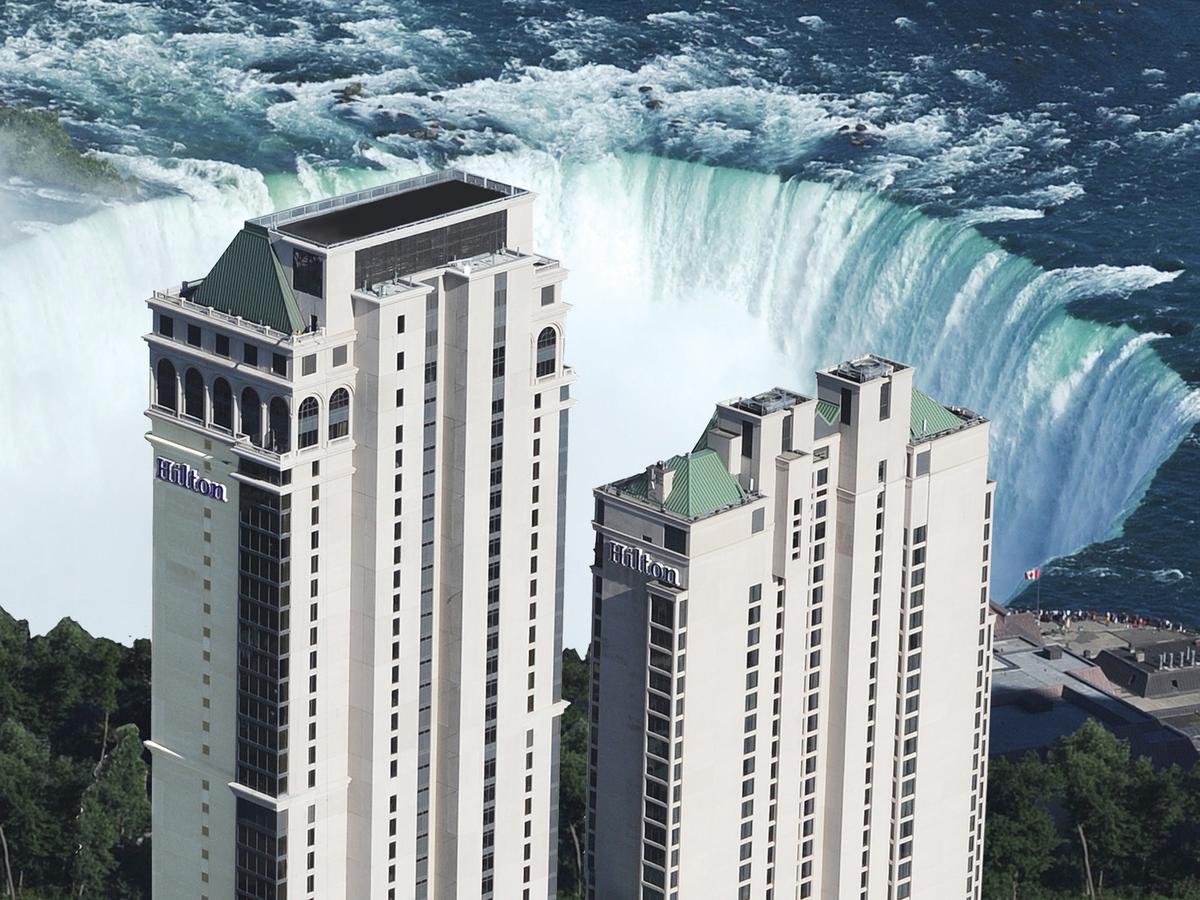 Hilton Niagara Hotel is connected to the Fallsview Casino Entertainment Centre by an indoor glass walkway. Hilton hotel can never disappoint you with their excellent service and their professional hospitality. At Hilton you can get rooms with Canadian Falls View as well as US Falls view. Can also get the city view and the Falls view from the room. 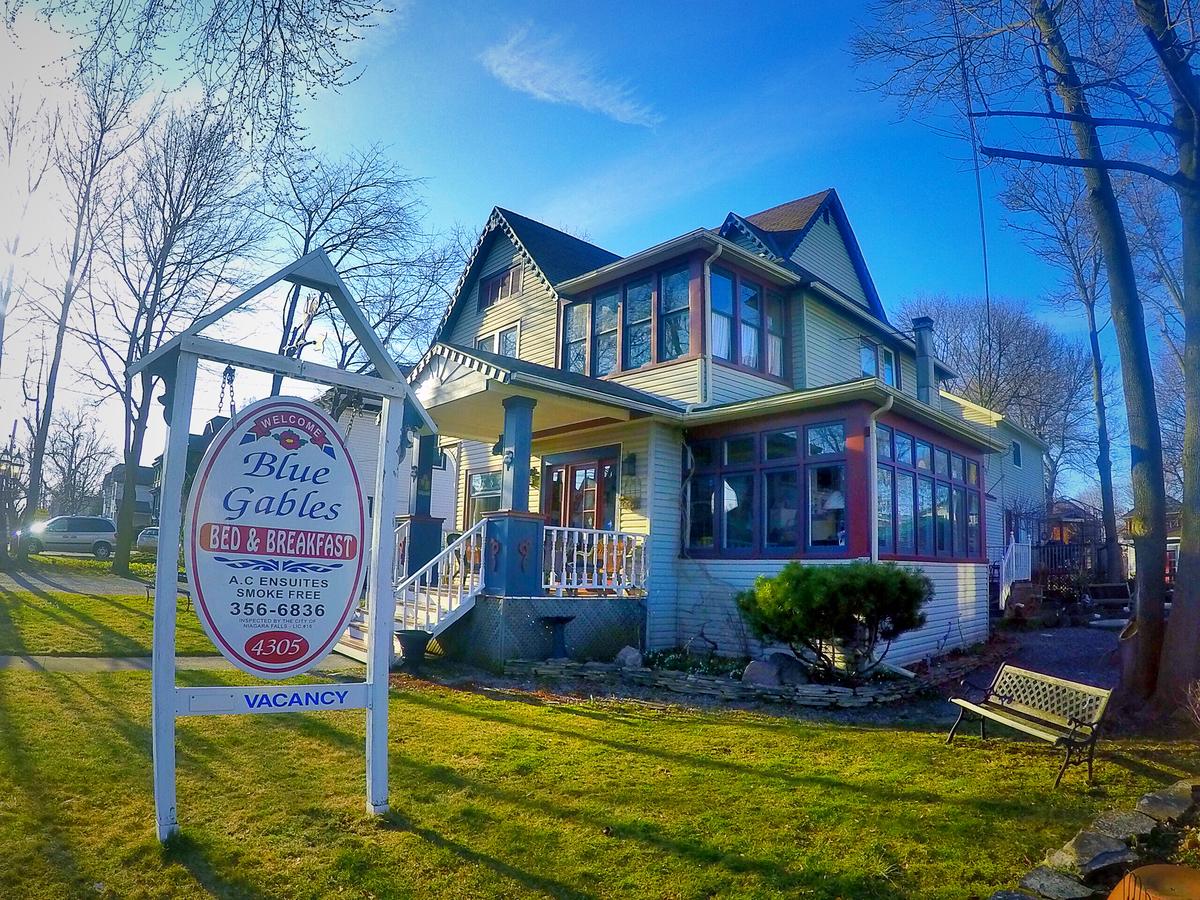 If you are looking for a homely stay, check Blue Gables a lovely gem in the city of Niagara. All the attraction are just a few kms away from the property. The rooms are beautifully decorated and the breakfast provided here is huge and delicious. 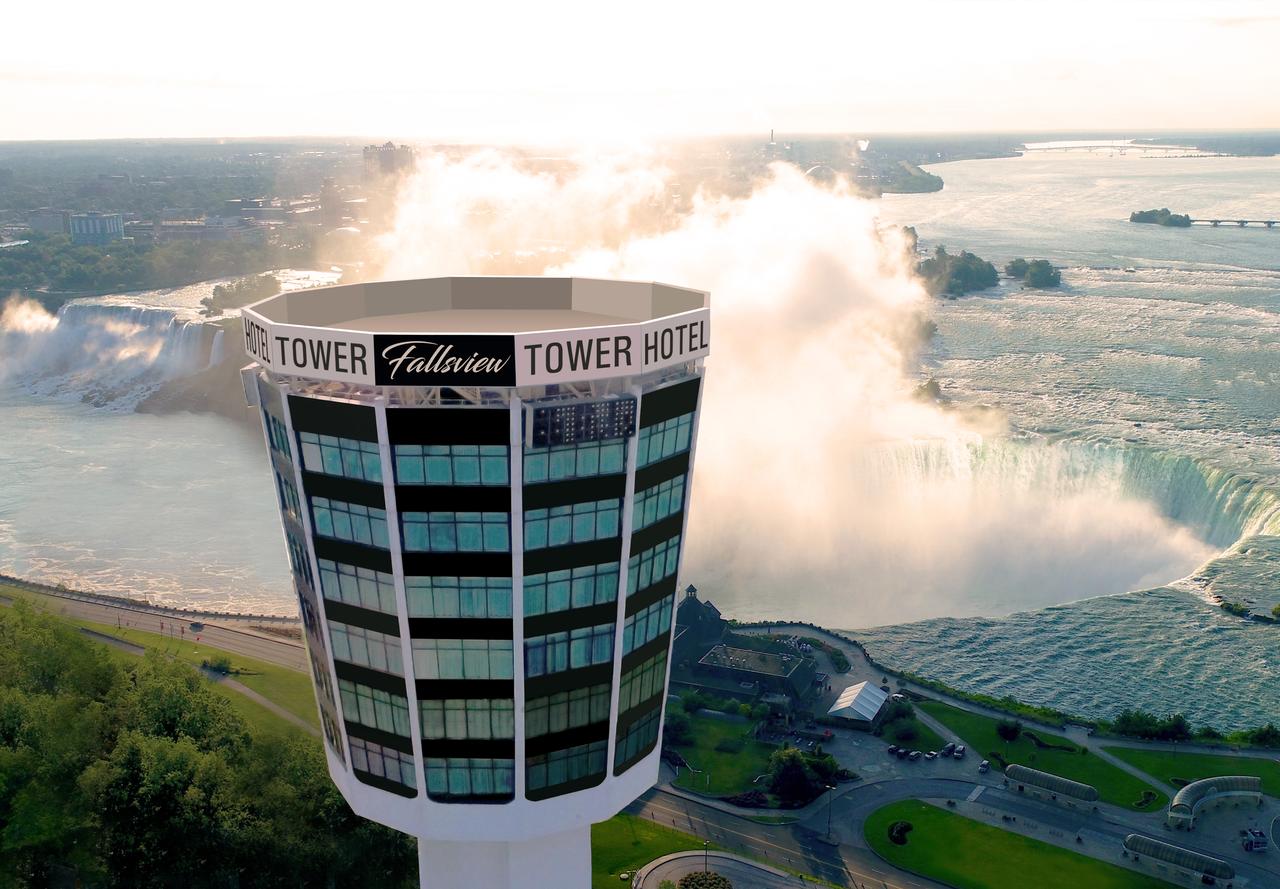 Tower Hotel has fall view rooms on your request. You can get an amazing view of the falls from the penthouse room and can witness the fantastic changing colors of the Niagara Falls. The guest staying at the Tower hotel can access the facilities at the Embassy Suites which is located right next door from the hotel.

Download Free Happy Journey Greeting Card, and greet your loved ones with the beautiful location travel e-card. Let them know that you care for them.

Please leave a comment below, if you enjoyed or find the information helpful. If you are looking for a beautiful stay in any other location, please let us know in the comments below. We would be happy to help you out in that, by listing few after reviewing. 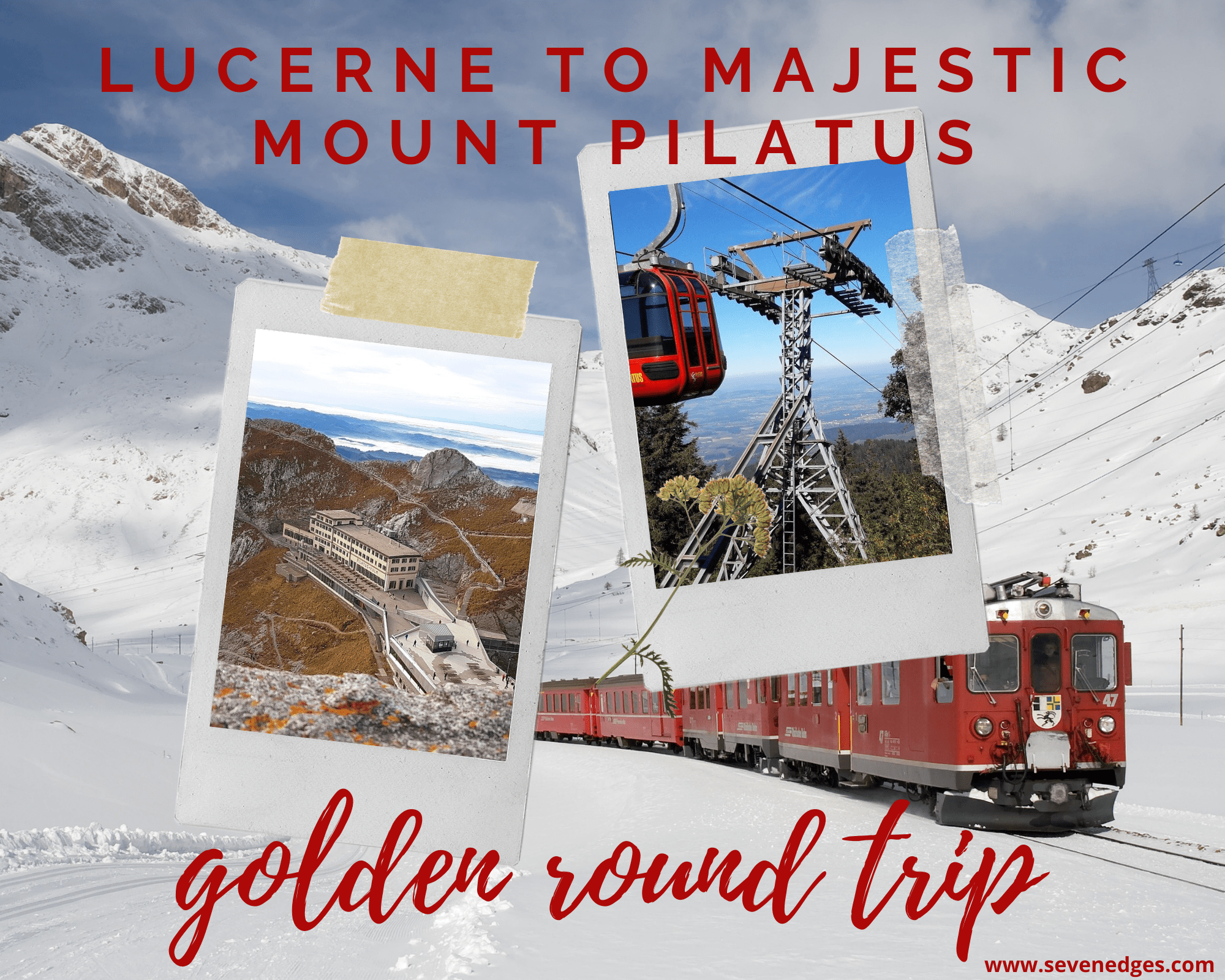 Plan a Day for Golden Round Trip 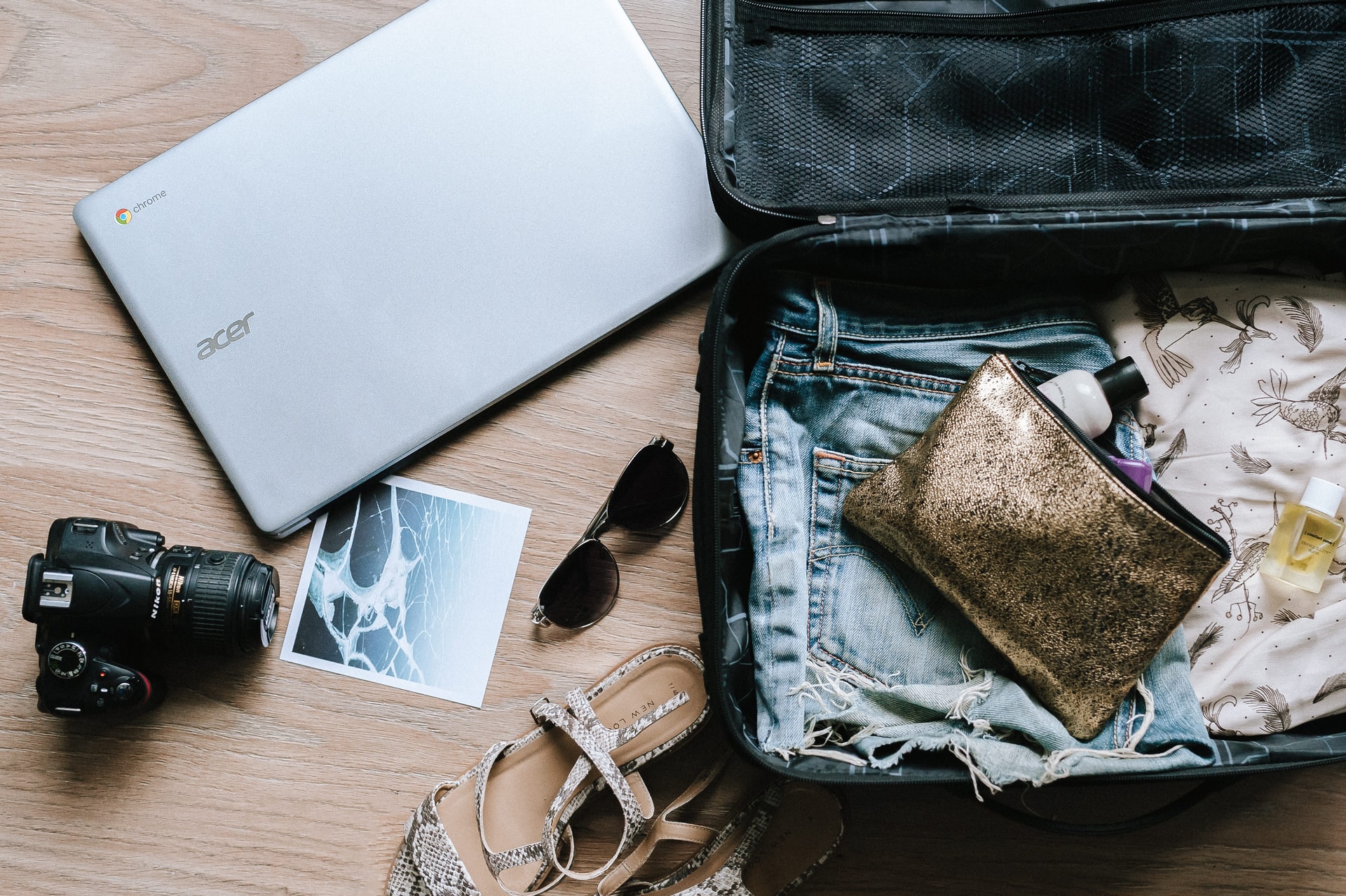 Get these travel gadgets and accessories according to your needs, and select the gear items suitable for the location you visit. 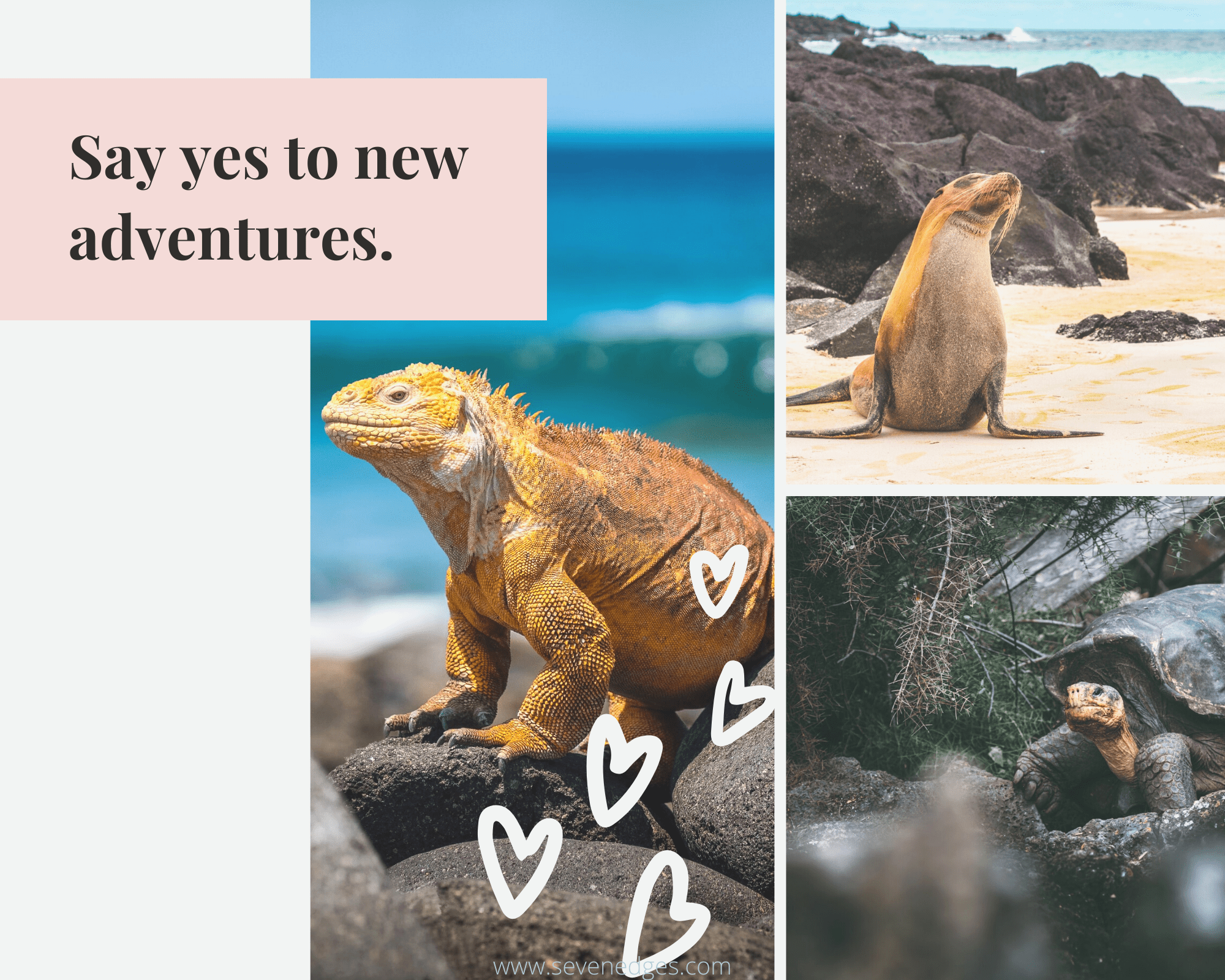 A Beachcomber! Then Galapagos is for You